When we look back in History, we find many impressive achievements that have transformed the way in which we live. We have come a long way and the work of the most brilliant minds in the world, shows that humans truly have amazing capabilities. We are even getting closer to a point in which the technology that we have created, could potentially replace us in many of the tasks that we believed that only humans could perform. It is very likely that in only a few decades, artificial intelligence will be able to do anything that humans can do. For many, the thought is at least a bit scary, but if we manage to keep control and ensure that technology works for us and not the other way around, the possibilities are amazing.

We don’t even have to wait decades to be amazed by what artificial intelligence can do. There are already many tasks that it can perform with the same good quality, or even better than humans can. We are not just talking about doing complex calculations or checking all the probabilities at incredible speed. Nowadays, artificial intelligence is even capable of writing moving poetry, creating delicious food recipes, composing music and painting in the style of masters like Van Gogh. Artificial intelligence is already ahead of humans when it comes to translating languages, withstanding dangerous work conditions and delivering accurate medical diagnosis. AI can survive what humans can’t and thanks to its fast translating capacity, it can help us to communicate with people who don’t speak the same language. It can also browse the web faster and learn quicker, which allows it to access new knowledge in a fraction of the time that we require.

Artificial intelligence has evolved in so many different areas that some of the things that it can do, are truly unexpected. For instance, it can become aggressive and even troll people in certain situations. Just like humans, artificial intelligence can have a competitive side, or be hostile, depending on the environment. AI excels at many games and it proved that it can beat top Texas Hold ‘Em poker players. In fact, AI managed to teach itself how to play using just the basic rules of the game and it continues advancing. Researchers have developed technology that will give expert poker players a run for their money, thanks to the use of key algorithms that allow it to interpret inputs and adapt to the circumstances. The latest AI in this field, can come with game strategies before and while it is playing. In addition, it can tackle possible vulnerabilities and improve its original strategy as it plays. Given that bluffing is crucial for Poker, this is one of the most impressive advancements in the field and it shows that AI can go beyond our imagination, in many different areas. A recent article on Partycasino shows why AI can’t beat probability so it won’t be cleaning out the casinos anytime soon. 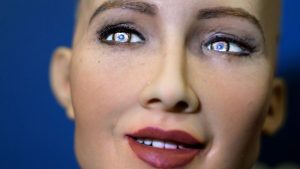 Of course, apart from amazing us with all its current developments and the possibilities that the future could bring, AI also raises many questions about ethics. In terms of tasks, it is already getting closer to us and even if it lacks consciousness, artificial intelligence is now able to complete tasks that require creativity and even curiosity. We have already seen robots that look and act like humans such as Erica and Sophia. The first is a revolutionary robot that surprised the world with its autonomous behavior, and the latter was even granted citizenship in Saudi Arabia. Although Sophia isn’t actually AI, it is capable of learning and telling jokes and can hold a conversation. She has a realistic human face and responds to multiple sensory inputs. If you have watched HBO’s popular TV series Westworld, you have probably already realized that it is not crazy to think that fiction could one day (maybe sooner than we think), become a reality.

Artificial intelligence has conquered areas that used to be human domain, but since it doesn’t have our capacity for general reasoning, we still have the advantage. All standard AI has programming, a supervised plan or method that requires human input. Besides, at the moment, AI focuses on specific tasks, but there is not a single AI that can perform multiple tasks better than a human would. Although in the future, AI could achieve general intelligence, for now we can still say that humans are able to combine multiple skills and abilities, better than machines.