Android Marshmallow has brought native fingerprint authentication to Android, and we’re now starting to see the benefit of the feature now that the Nexus 6P and Nexus 5X are available for purchase. In a new screenshot leaked by tech site Android Police, you can see the fingerprint symbol with the words “touch the sensor to continue,” prompting you to place your finger on the fingerprint sensor on the back of the new Nexus devices to verify your identity and authorize payment. 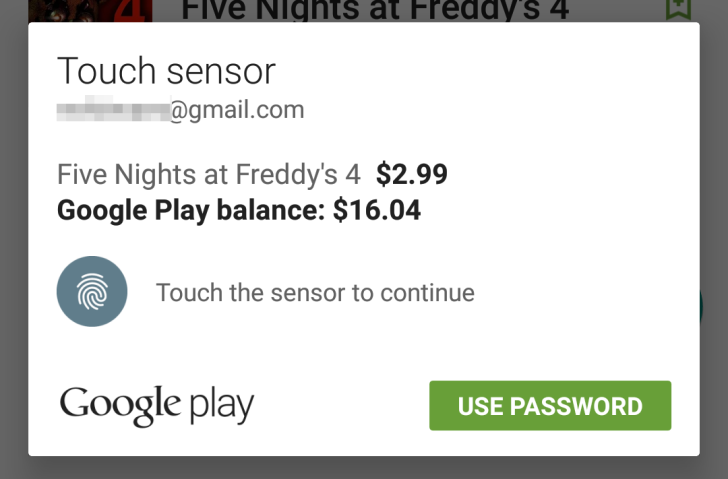 As the site notes, though, fingerprint authentication may be native to Android now, but it’s not activated by default; you’ll have to go into your Play Store settings and do that yourself. After enabling it, though, you won’t have any problems using it in the future.

Android Marshmallow also brought native SD card support for those who want to use microSD cards with their devices. New rules were published this week, though, distinguishing between internal storage and external storage and how to use your external storage (microSD card) as your internal storage. Despite Google’s decision to make SD cards supported in Android Marshmallow, Google decided to forgo creating a Nexus with an SD card. While some may think it odd, Google has also emphasized security and data encryption within Android Marshmallow – and SD cards are prone to security risks. Once a person makes his or her SD card the preferred, go-to native storage within the device, the SD card will be encrypted and all photos and videos will go to the SD card and not the local storage.