Are you excited about Android Marshmallow? We’ve leaked wallpapers and some cool features of Android’s sweetest treat to date, but you may still be wondering if your device will receive Google’s latest update. Well, have no fear: one source has gathered the information for you so that you need not worry about that.

The source in question is MyDrivers, and the site has compiled a list of sources related to Android manufacturers who are already taking steps to announce which of their devices will see Android Marshmallow and which devices will not. Of these manufacturers, of course, a few are significant. We’ve already covered Motorola’s announcement, so we won’t cover its devices. We will focus on Samsung and LG, among others. As for Google, Nexus 5, 6, 7, 9, and Player owners are already seeing the latest rolled out via a firmware update this week.

Next to Samsung in the Android world stands LG. As Samsung’s fellow Korean rival, LG has a stake in Marshmallow, but only has three devices as of now that will receive the new update.The LG G3, LG G4 (2015), and the G Flex 2 (early 2015) will all receive Android Marshmallow. The first-generation G Flex, G2, and G2 Pro look as though they’ll miss Marshmallow.

Verizon just announced recently that the rumored Xperia Z4v will not make its way into the Verizon lineup, but Sony has not forgotten about Xperia Z3v owners who purchased the first device on the carrier’s network from Sony in a long time. Apart from the Xperia Z3v, there’s the Xperia Z3 in Japan and the Xperia Z3 Compact, along with the Xperia Z Ultra (Google Play Edition), but some of its devices getting updated are mid-range devices. The Xperia Z1, however, the first of the line, will not receive Android Marshmallow.

There are other manufacturers looking to upgrade their devices, and you can take a look at them at the source link below. Are you getting Android Marshmallow? Are you not? Excited or disappointed? Let your voice be heard in the comments below. 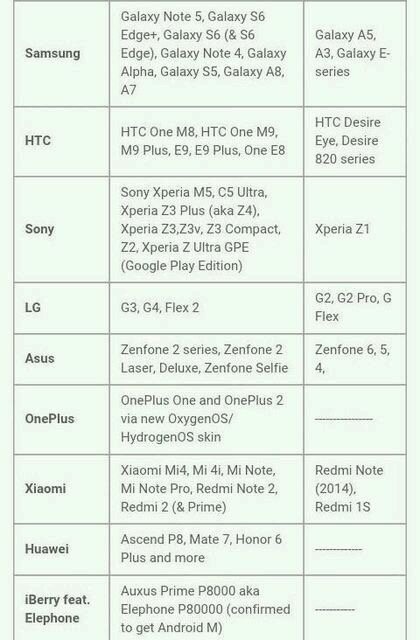