The Galaxy Note 7 is not a name you’d expect to hear this soon, particularly because you’re still waiting for the Galaxy Note 6, right?

Well, we’ve been keeping our ears to the ground about when Samsung will bring its Next Big Thing, and a renown leakster is back to give us something of a confirmation (though not an official one). Evan Blass, @evleaks, posted a few days ago that “Galaxy Note 6/7 launch event is almost exactly two months away,” hinting that the launch of the Galaxy Note 7 could arrive in the first or second week of August. We’re thinking the start of the second week here, since two months away (or something close) from June 2nd (the date of evleaks’ post), would put the Galaxy Note 7 at around anywhere from August 2nd to August 9th. August 9th would indicate the early portion of the second week of the month, since the first week is located between August 1st and August 7th. August 8th starts the second week, and August 9th would fall squarely within that timeframe. 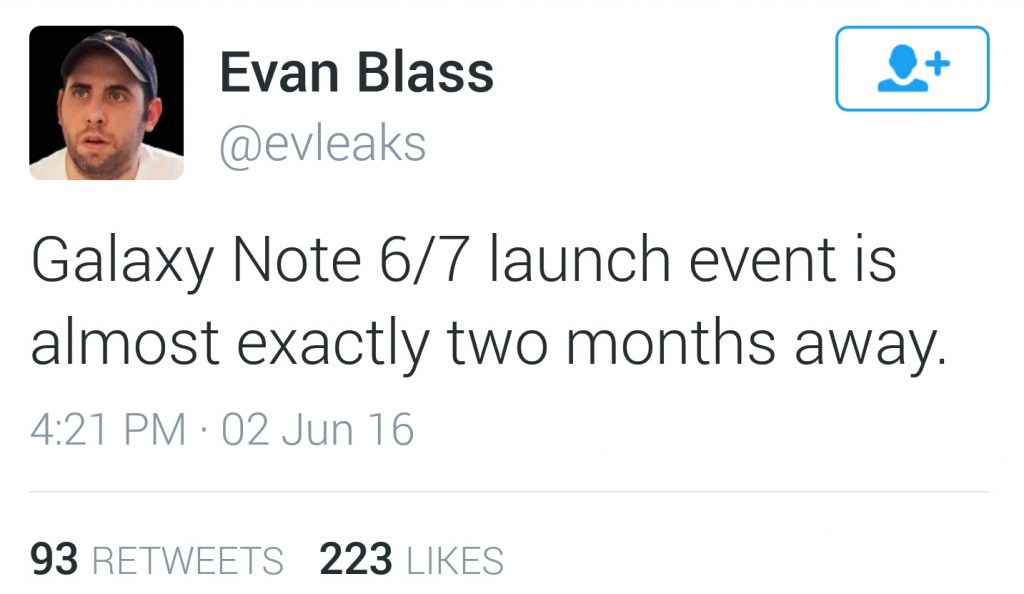 An August 9th Galaxy Note 7 launch (or Galaxy Note 7 edge; or both a non-edge Note 7 and Note 7 edge) would put the device firmly in the same launch time as last year, with Samsung having launched the Galaxy Note 5 in New York City on August 13th. The 9th is just 4 days away from the 13th, so Samsung could launch the device on the 9th in certain other countries in the world — with the same-day launch on the 13th for US customers as the Korean giant did last year. Some have said that Samsung will launch the Galaxy Note 7 in something of a slightly earlier fashion this year, but no rumors at this time point to an unusually early launch date. With that in mind, I see no reason for any consumer to presume that we’ll see a July announcement and release – though the July launch rumors are swirling now as they did last year and the year before (some rumors are incredibly false, but they’re never retired, unfortunately).

Whatever the time, and whatever the 2016 Galaxy Note name, the device is lining up to be a winner. From what we know, Samsung intends to expand its Off Screen Memo capabilities, with a Scroll Write feature that will let you write on the black display indefinitely as the written words scroll up-screen and the page scrolls down-screen.