It’s no secret that Android 6.0.1 has been in the wild for some weeks now: we’ve seen it with the Cherry Mobile G1 Android One smartphone (Philippines), and we just saw Android 6.0.1 in benchmarks for Google’s very own Pixel C Chromebook a few days ago. Now, however, Android 6.0.1 has been released for current Nexus devices such as the Nexus 6P, Nexus 5X, Nexus 6, Nexus 5, and Nexus 7 (post-2012). According to Google spokesman Hiroshi Lockheimer, the Nexus Android 6.0.1 update would roll out this week. Lockheimer made the declaration from his Twitter page on December 2nd:

Look! New emoji coming to #Nexus next week. Fonts and tech details shared with OEMs to include in their updates too. 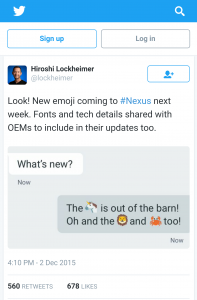 When asked about whether or not the 200 new emoji would mandate a new update, Lockheimer responded, “requires a system update, including new fonts, new code and new keyboard. Updates will come from OEMs, starting with Nexus.” What Lockheimer reveals here is that Nexus devices will not only get 200 new emoji (or rather, emoticons), but also a new Google keyboard and new fonts. We don’t know anything about what this entails, except to say that you’ll see the difference when you get the update on your Nexus device. Of course, Lockheimer continues the tradition of what we’ve come to expect in the Android world: Nexus devices get the update first, followed by the remaining Android devices that are still update-eligible.

We don’t know much else about Android 6.0.1, so we’re considering that the new emoji, keyboard, and fonts are the most excitement we’ll see. At any rate, Android 6.0.1 is alive and has been released to Nexus devices. If you’re a Nexus owner (Nexus 5, Nexus 6, Nexus 6P, Nexus 5X), you can expect to see the new update roll out within the next few days. Wait for the update and don’t hit the “software update” button too much. Perhaps the new Android Marshmallow update will improve the washed-out colors on the Nexus 6 and Nexus 6P’s AMOLED displays.