HTC has provided its share of HTC 10 deal offers since the device was unveiled. First, the Taiwanese phone maker gave high-resolution audio earbuds for those who ordered its 2016 flagship phone from HTC’s website. Next, the company discounted the HTC 10 to $599, giving buyers an automatic incentive on the device. Apart from HTC’s own deals, carriers Verizon and T-Mobile have given further price drops and accessories such as a rapid charger and Ice View Case.

Now, HTC is back to entice you with yet another HTC 10 deal for audiophiles: for those who pick up the device now, they’ll get a free pair of JBL Refect Aware C noise cancelling headphones + $100 off accessories for the new device. In other words, you’re getting two deals here into one to pick up the HTC 10. 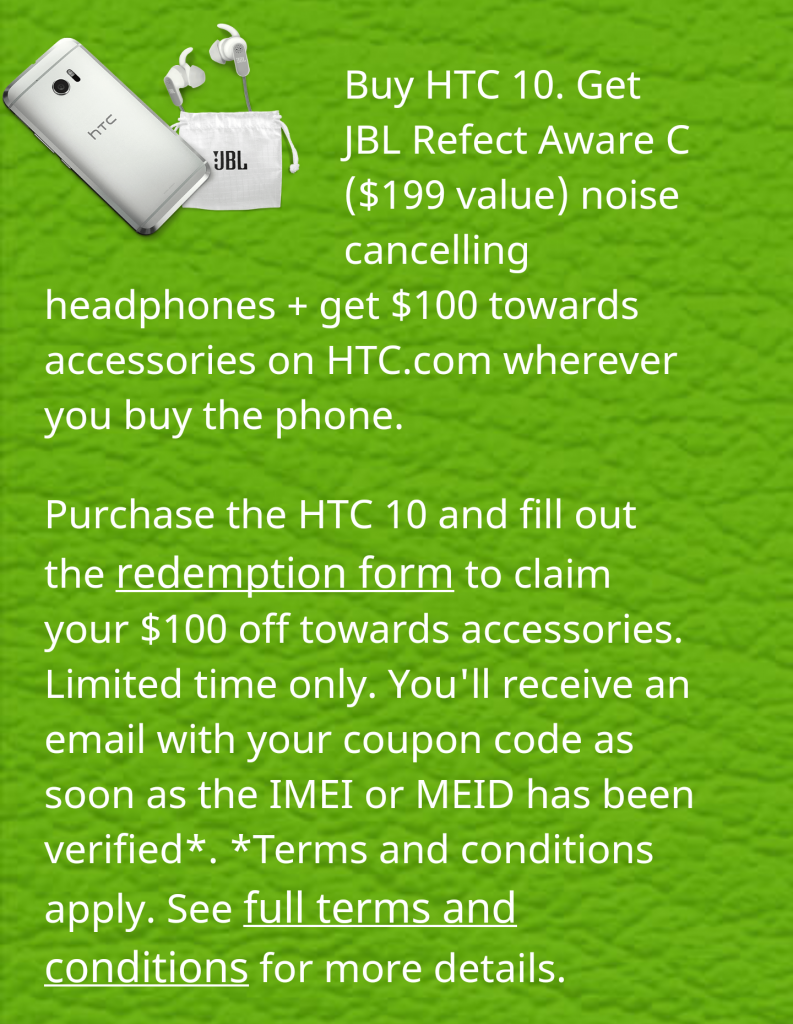 The HTC 10 deal here shows us that the Taiwanese smartphone maker is looking to sell its smartphones as much as possible, considering that HTC will have a tough time in the market this year against its staunch rival, Samsung, in the Android smartphone race. HTC has always been said to have stellar build quality, but Samsung’s Galaxy S6 and Galaxy S6 edge in 2015 have led to further decline in HTC sales — considering that Samsung is now crafting what many consider to be premium smartphones with stellar software and all sorts of in-built goodies such as IP68 water and dust resistance and wireless charging.

The HTC 10 is well-built, but it’s practically the same hardware design as the HTC One M7, One M8, and One M9 from the last three years. Additionally, HTC decided this year to remove some of its duplicate Android apps and cooperate more with Google’s own Android software. This seems to appeal to some who don’t want HTC to force its apps on buyers, but ultimately, this leads to HTC being nothing more than just a hardware developer who has relinquished its right to make software.

We’ll be back soon to publish our own review on the HTC 10, but if you’re a person who wants a phone to look good and provide a basic high-end experience, then you shouldn’t neglect the latest HTC 10 deal. You can find the deal at the source link below.