With HTC’s decision to bypass AT&T and sell directly via its own website, the company has assured AT&T customers that the new HTC 10 will have full AT&T support (it said as much when announcing that AT&T would not carry the device). Well, T-Mobile customers, whose devices come GSM unlocked (some customers will pick up their device from HTC’s website and take advantage of the company’s new $100 promo discount and pick up new high-resolution audio headphones instead of paying full price through T-Mobile) wanted to know if the unlocked HTC 10 model would support T-Mobile’s voice over LTE (or VoLTE) and WiFi calling and texting. Fortunately, HTC’s Mo Versi had an answer in the affirmative. Here’s how the conversation took place:

customer: “Will VoLTE/WiFi Calling/Band 12 be fully supported on the Unlocked HTC 10 for @TMobile? @HTCUSA @htc” 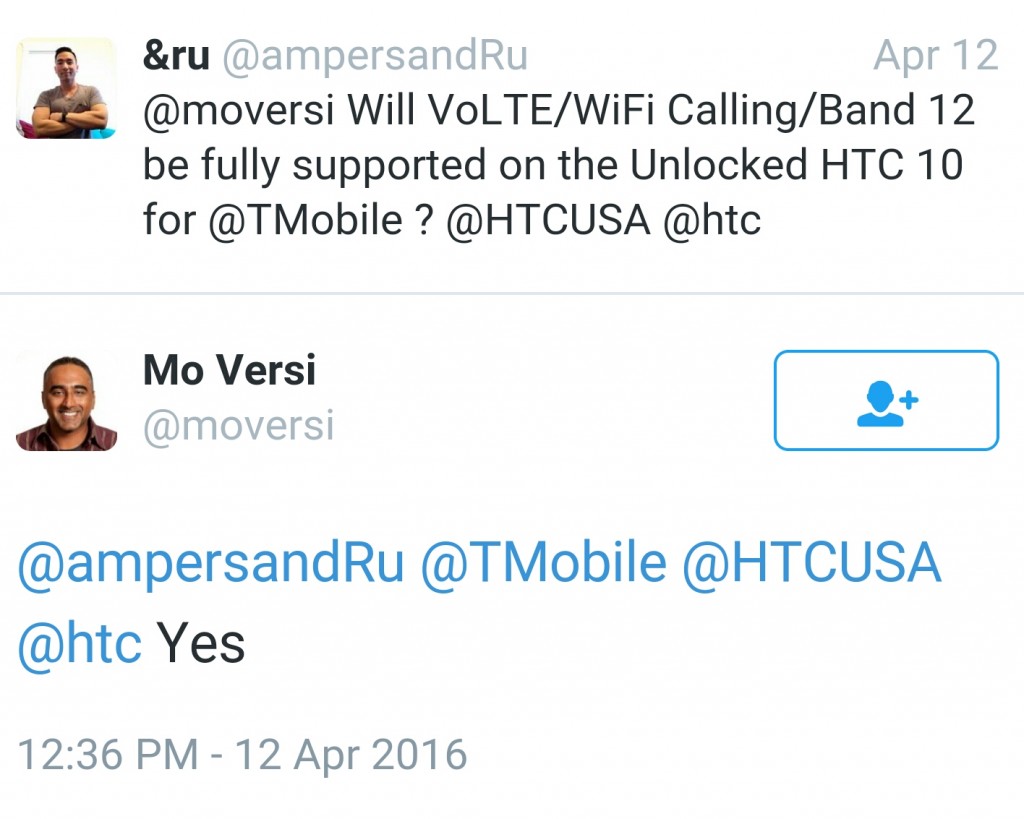 This should come as a comfort to users who’ve been wanting to take advantage of HTC’s website discount. The HTC 10 costs $699 in terms of its full retail price, but website buyers can get the device for $599 and pick up some high-audio earphones to go with it. HTC has said that it can’t assure users that its high-audio earphones will come to carriers, but the company can provide its own freebies by selling directly to consumers. To be able to order via HTC’s website and get the HTC 10 at a discount with high-audio earphones to match, provide more reasons to bypass T-Mobile (or even AT&T) when ordering. HTC’s answer in the affirmative about HTC 10 carrier support is just icing on the cake.

The HTC 10 features a 5.2-inch, Quad HD display with a 2,560 x 1,440p screen resolution, a quad-core Qualcomm Snapdragon 820 processor, 4GB of LPDDR4 RAM, and 32GB of storage, a 5MP Samsung-made front camera with optical image stabilization or OIS (a first for front cameras), 12MP Sony IMX377 UltraPixel back camera, IP53 splash resistance, and a 3,000mAh battery with HTC’s removal of duplicate apps from Sense 8.0. It’s also been confirmed that there’ll be no 64GB HTC 10 model for the US market, so American customers will have to make do with 32GB plus the 2TB-capable microSD card slot. The device is running Android 6.0.1 Marshmallow out of the box, and looks to be the Taiwanese maker’s best flagship yet. You can always hold out for the bright red variant that is currently locked up with the Japanese market.