HTC has just released Android 6.0 Marshmallow for the unlocked One M8, and now, wha’d’ya know? It looks as if its 2015 flagship, the HTC One M9, will now get Android 6.0.1 in an update coming soon.

HTC spokesman Mo Versi noted this on his Twitter wall to keep HTC users informed: “Lots of questions on this, so quick update: M9 unlocked Marshmallow OS update and A9 6.0.1 (with updated emoji) is on target for this month.” 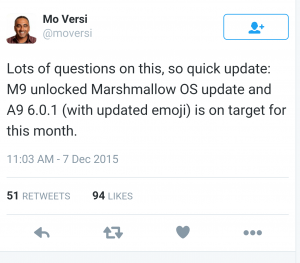 Android 6.0.1, as we learned from Google’s release today, will bring three major factors: 1) 200 new emoji, 2) new fonts, and 3) a new Google keyboard. We don’t know the changes of Android 6.0.1 outside of these, but we imagine it will also bring bug fixes and enhancements to the world’s most popular mobile platform. HTC has been one of the foremost companies to update its devices, alongside of LG. Samsung has surprised us in recent days, having now released Android 6.0 Marshmallow for Galaxy Note 4 users in Hungary, at least (likely unlocked Note 4 owners), but it will take some weeks before carriers push the Android 6.0.1 update to their customers.

HTC has been under the gun in recent days for not promising fast, swift security updates since Google decided to issue monthly security updates in the wake of Stagefright and other software vulnerabilities within Android. The company is saying that it will push out updates within 15 days for the One A9, however, which is even better than the 90-day period it declared some time ago. We’re assuming that the A9 is meant to be one of HTC’s flagships, and, being the newest, having the latest and greatest all the time may provide the Taiwanese manufacturer a chance to “get it right” this time.