The HTC O2 surfaced for a time and seemed to quickly disappear from the news, but a device codenamed “HTC Perfume” is soon to arrive on the market, says renown leakster LlabTooFeR.

The leakster made an announcement via Twitter yesterday morning: “Remember reports about next HTC’s flagship codename HTC O2? It’s dead…HTC Perfume is next flagship. Android 6.1 and Sense 8.0_GP…” 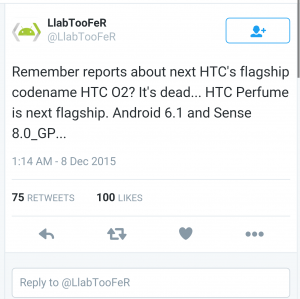 The HTC O2 is dead, in case you were wondering, but the HTC Perfume is headed to market. We aren’t given any specifics here, but we do know that the new HTC device (pass the One A9) will run Android 6.1. Google just released Android 6.0.1 earlier this week, and we’ve heard nothing about Android 6.1 until now. We can assume from this statement that there is an update beyond 6.0.1 before we arrive at Android 7.0. We don’t know what Android 6.1 will bring, but we do know that Google has said that it intends to fix the washed-out color reproduction issues with the Nexus 6, 6P, 5X, and Nexus Player. Of course, the fix will come via a new update and, since Android 6.0.1 is already out, Android 6.1 is likely the next named update within Marshmallow that will fix the problem.

We don’t know why the device is codenamed “Perfume,” but perhaps we’ll find out shortly. In any case, yes, there is a second update past Android 6.0.1 to look forward to. In Android, however, the question always comes down to when can you expect it. Unfortunately, that is unknown.