The iPhone 6c has been a rumored phone since March with little to show for it except for Foxconn’s worker hire, but that all changes now. Thanks to a new case leaked from site M.I.C. Gadget, we have some additional details to confirm about the iPhone 6c based on a new cardboard case that has been made for it. 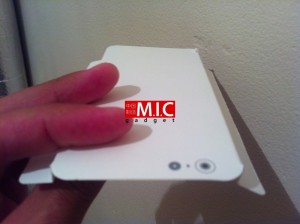 The new iPhone 6c case (currently, a cardboard prototype), has the cameras in the same location as those of the iPhone 6s and 6s Plus. We don’t know whether or not Apple will make the iPhone 6c with the same color variation as the 5c, or add a new color to the lineup. The new sixth-generation iPod Touch colors are mature and classy, and we hope Apple implements the new iPod Touch colors instead of the bright, child-like colors of the iPhone 5c (the bright blue and yellow colors, for example).

Could Apple have its sights set on a true budget-friendly phone? We’ll have to wait and see, but at least a case prototype is encouraging.

Apple’s upcoming iPhones will sport 2 GB of LPDDR4 RAM and surpass 50 million units, according to reports