The Samsung Galaxy S7 and S7 edge often dominate the news and the consumer market, but LG announced its own respectable smartphone at MWC on the same day as its Seoul rival. And yet, there are some who respect what Samsung offers in its latest smartphones but don’t necessarily want their smartphone to be from Samsung. For this market, or for the curious tech enthusiasts who still want to give LG a chance (even though they cradle their Galaxy S7 edge and are more than happy), LG is pleased to sell its latest G5 smartphone to you. The latest news surrounding the LG G5 is that LG’s latest smartphone will arrive in Canada, America’s northern neighbor, on Friday, April 8th, 2016.

The LG G5 will come to all major Canadian carriers and minor carriers as well, such as Wind Mobile (recently acquired), Videotron, Sask Tel, MTS, Eastlink, and giants Rogers, Telus, and Bell. For Rogers, Fido, and Videotron have said that LG G5 buyers will get a special gift in addition to the LG G5: LG’s CAM Plus for free. That’s right: you won’t pay a dime for the Cam Plus, an accessory worth $100 CAD that provides physical camera controls for digital photographer lovers. The Cam Plus, if you’ll remember, also provides an auxiliary 1,140mAh battery for those who can always use an extra battery. The G5 features a Quad HD display with 1440p screen resolution, so additional battery is always welcome when powering a high-resolution display. Rogers Canada confirmed as much via social media a few days ago. 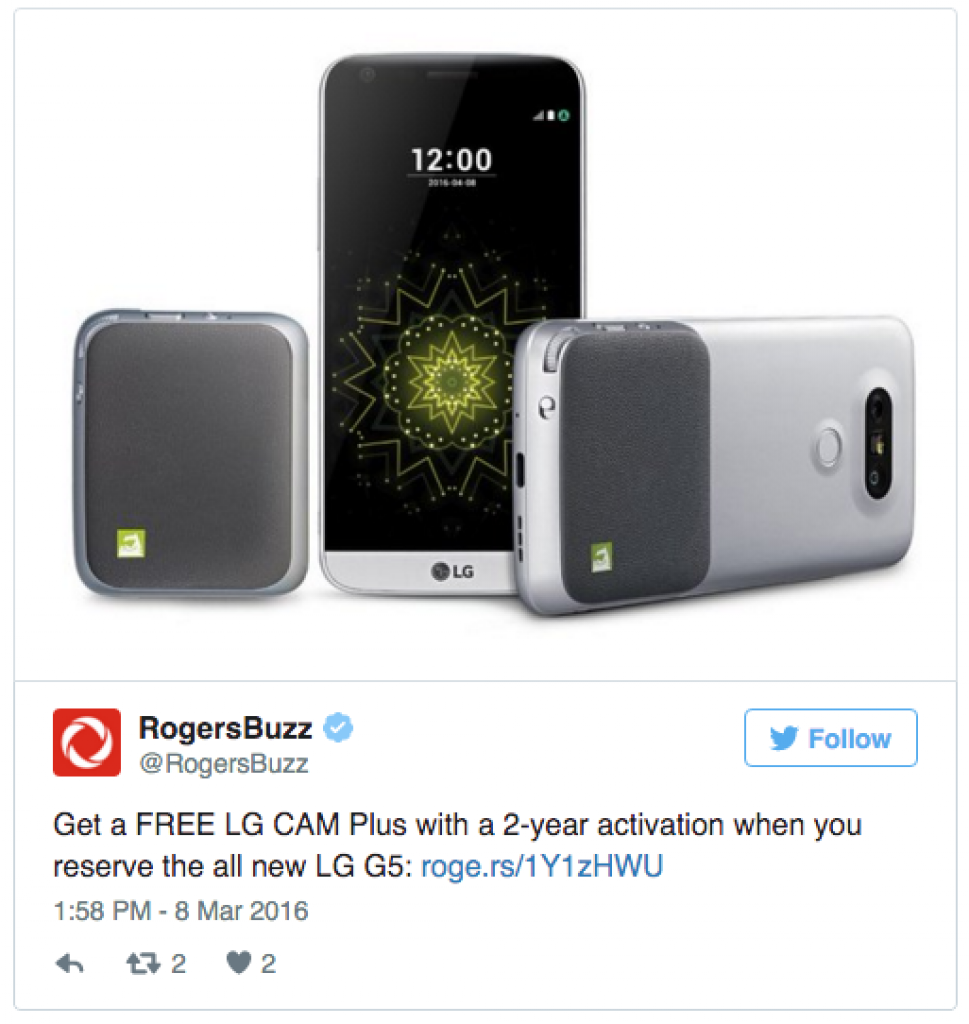 LG uses its best display technology in the LG G5, with the company opting for an IPS Quantum Dot display that provides LCD displays with the color reproduction of AMOLED displays. Quantum Dot displays can be tuned to provide more saturated or less saturated colors, depending on preference, making Quantum Dot displays ideal for televisions and smartphones. The LG G5 itself features, in addition to its 5.5-inch Quad HD Quantum Dot Display, Qualcomm’s quad-core Snapdragon 820 processor, 4GB of LPDDR4 RAM, 32GB of storage, and a 2,800mAh battery, with the device running on Google’s latest in Android, Android Marshmallow.

The Cam Plus is part of LG’s commitment to creating what many are calling the first modular smartphone in known history, and the Cam Plus allows you to attach physical buttons for camera controls on the device. This is a feature that some see as cool and welcome, while others see the physical touch buttons here as a step back to the modern digital smartphone age. LG does have an Always On Display on the LG G5, which allows you to keep track of time, text messages, missed calls, and other notifications without cutting on your display each and every time you need to check notifications quickly.