The Huawei Nexus 6P has become a big deal in recent days, due to the fact that all rumors have suggested that it will be the most expensive and most prestigious Nexus device on the market. As we predicted a few days ago, more leaks would pour in to give us a clearer picture of what to expect when Google finally announces it.

Google’s been planning an employee training manual for its latest smartphones, with Mountain View trying to help make its phones easier to sell in retail and carrier stores, with the company providing slides that give the major points to emphasize about the Nexus 6P.

The slides not only give the major points about the Nexus 6P, but they also give details that we’ve yet to discover about the upcoming Huawei Nexus. First, one slide says the “Nexus 6P runs Android Marshmallow,” referring to what has been known as “Android M.” We outed this some time ago, but for those who were still wondering about the update name (and waiting for Google to verify it), Google has done just that – with the name and the bugdroid Android symbol holding a marshmallow in its hands.

In another slide of Android Marshmallow, Google markets the new customizable app permissions, with the statement “clearer choices over the data you care about.” Apart from “Now on Tap,” a feature that allows you to tap on a word or item and have Google Now bring up detailed information, Google seems to be marketing the new app permissions because, contrary to the current setup, you’ll now be able to use apps without granting an app all permissions. You can use an app while denying the app permission to use your microphone, for example.

The Nexus 6P will come in four colors, but they’re called Aluminum, Graphite (black), Frost (White), and Gold. As for storage, you can expect 32GB, 64GB, and 128GB storage models. Contrary to the Nexus 5X, there is no 16GB model for the Nexus 6P – which confirms that the Nexus 6P will be the most expensive of the two models. That $500 price tag is looking likely at this point. Google also says that the Nexus 6P is “the first all-metal Nexus flagship smartphone,” and that it features the latest Gorilla Glass 4 from Corning – so expect that $649 price tag. We happen to think this is the reason why Google’s holding out on the price for that reason, but we don’t see the need for the search engine giant to hold it in now that the retail boxes, photos, and specs have leaked. 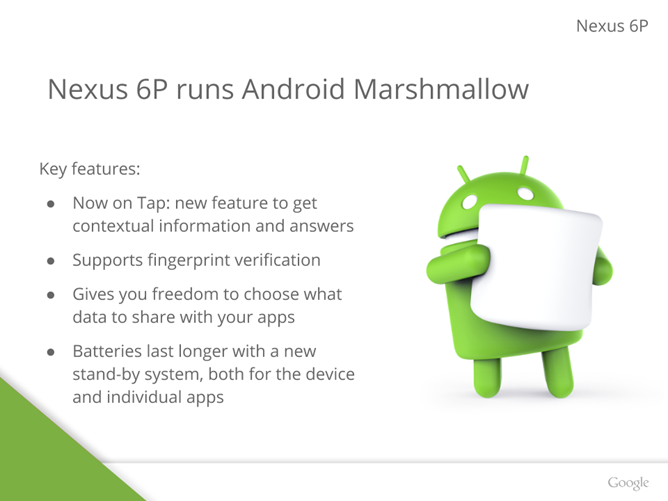 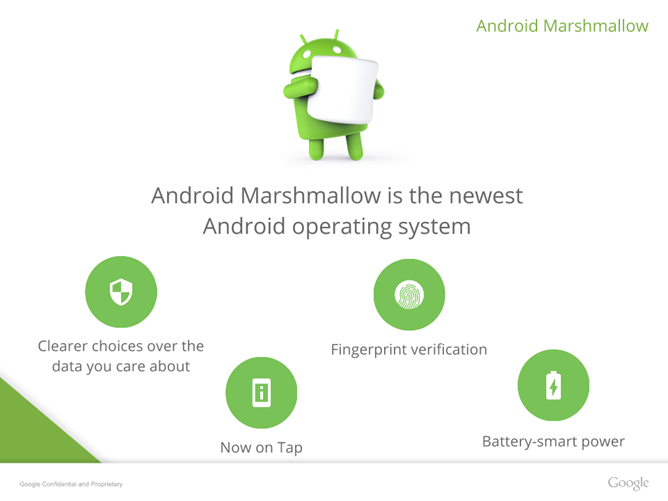 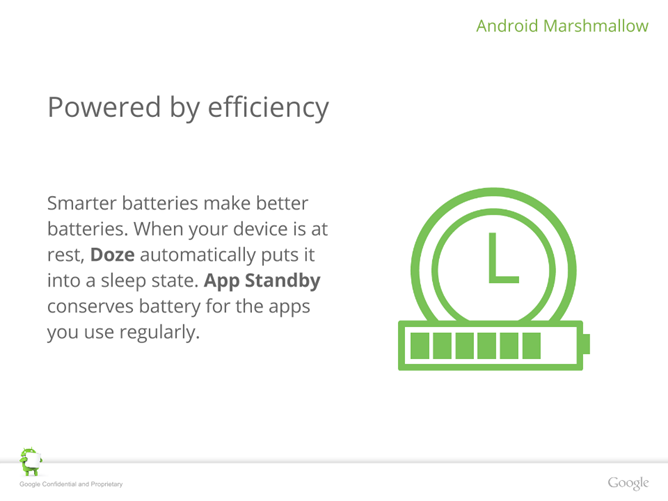 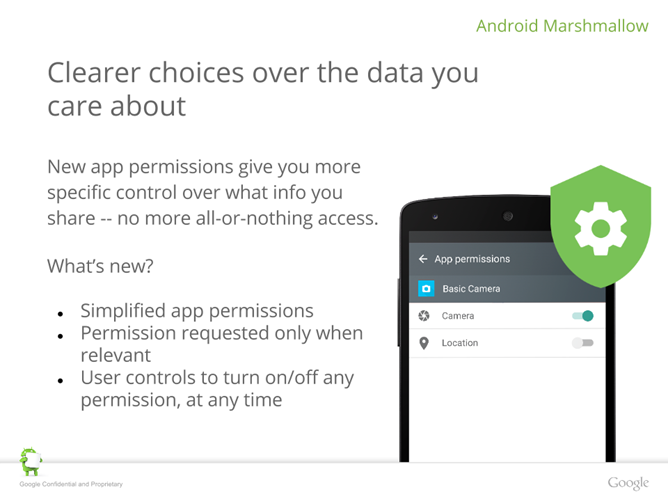 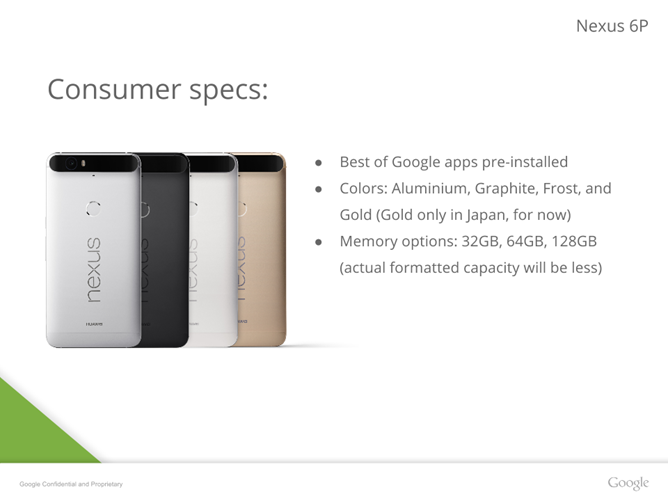 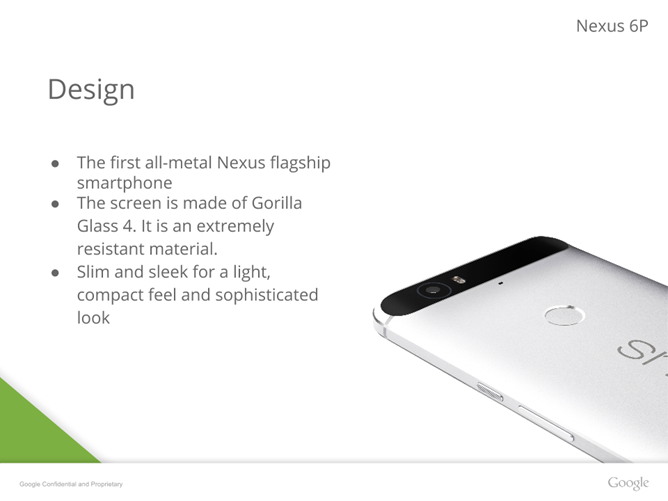 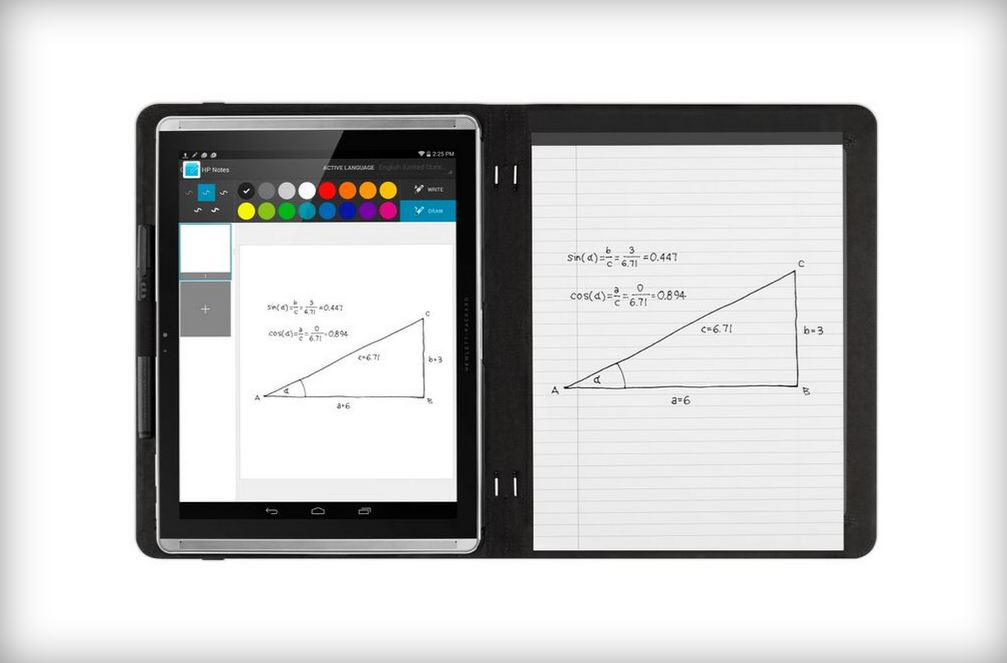