OnePlus has a habit of attempting lofty things to get attention, but the company has finally come to its senses and killed the dreaded invite system every consumer hated (whether a OnePlus fan or not). Still, that hasn’t stopped the Chinese manufacturer from trying to do things to hype the arrival of the OnePlus 3 for its fan base and the media, and the company has now provided one way in which it looks to garner sales (apart from the Loop VR purchase method set for the unveil date): have a flash sale.

The news leaks to us courtesy of Italian site AndroidWorld, with the claim that OnePlus will sell the OnePlus 3 at the June 6th flash sale for 2,999 yuan (or 400 euros, or $400 USD). OnePlus says that the price at the flash sale is not the final price, so users may have to pay extra should the price of the upcoming handset be more than they paid for it – or be refunded if the price is less (or decide to withdraw their bid for the device if they’re simply unwilling to pay the difference). The flash price and the final price could differ based on company whim, but it could also differ based on specifications. Someone could order the 6GB RAM model at the high-end for the OnePlus 3 and pay a significant extra cost, as compared to someone who’s content with a 3GB or 4GB RAM model. I think OnePlus should make up its mind about the price before the flash sale, since there shouldn’t really even be one at all. If the OnePlus 3 is as good as the manufacturer says it is, then invite programs and flash sales (without discounts and savings, mind you) are nothing more than false promises of hype that are designed to bring the company more media attention than customer benefits.

The time of the flash sale on June 6th is set for 10AM, although the poster, written in Chinese, doesn’t exactly tell us what time in question (unless we can assume its EST, though I don’t think this is a good idea). All orders placed at the flash sale will ship on the day of the OnePlus 3 announcement (which is June 14th, confirmed by not only a OnePlus representative but the company itself when announcing the invite-free nature of the sale). We don’t have any details on what makes this flash sale more significant than any other, specifically because, if you choose to sell the phone in a flash sale 8 days before announcing it, what good is the announcement? What’s the purpose of the announcement if the phone will be sold 8 days before the big announcement? I understand that these customers wouldn’t get the handset shipped to them until June 14th, but I think OnePlus is doing something strange here.

What makes phone deliveries so special is when they come after the announcement (the key here is the word “after”) and before a device goes on sale worldwide. I received my Galaxy S7 edge on March 9th from Verizon, two days before the device went on sale here in the US (March 11th), and I think this is the best way to treat customers. Giving a flash sale where 1) the price is still undetermined, 2) you can only order the phone, 3) you’ll have to wait until the announcement day before it’s shipped, and it will take a few days after that to arrive at your door, and 4) you’ll have to buy the device via Loop VR if you want to get your hands on it) says to customers that OnePlus hasn’t learned the meaning of conducting itself as a top-notch company with a prestigious handset to sale.

The flash sale basically gives OnePlus free media attention – though I’m sure this kind of attention is not what OnePlus was aiming for. While the brand has labeled itself in the OnePlus a “flagship killer,” I’m sure that this term doesn’t mean anything good (they’ve also been an invite-killer and now, an insider-look killer, too). All these special events and activities in the name of hype show that OnePlus is still putting itself before the needs of customers.

Only 1000 units will be available, priced at $455, so you better grab one before they run out. 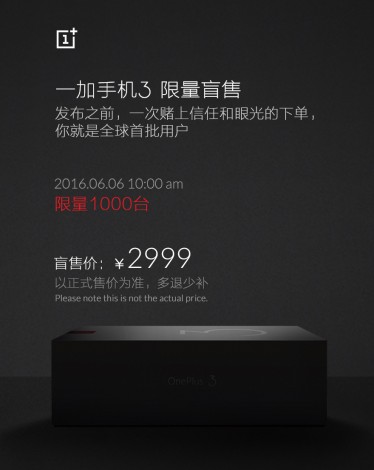