Samsung announced the Galaxy Tab S2 last August in New York City, a tablet that takes on Apple’s iPad Air series with its commitment to being thin, light, and fast, with all the software productivity that Samsung users are accustomed to. This year, the Korean giant is back to release the Galaxy Tab S3. According to Russian tech journalist Eldar Murtazin, the Galaxy Tab S3 will be unveiled on September 1st, which is right around the corner. Samsung usually releases the Tab S series around August (mid-to-end), so this is slightly late but in accordance with the Berlin, Germany IFA 2016 conference that takes place in Barcelona, Spain. 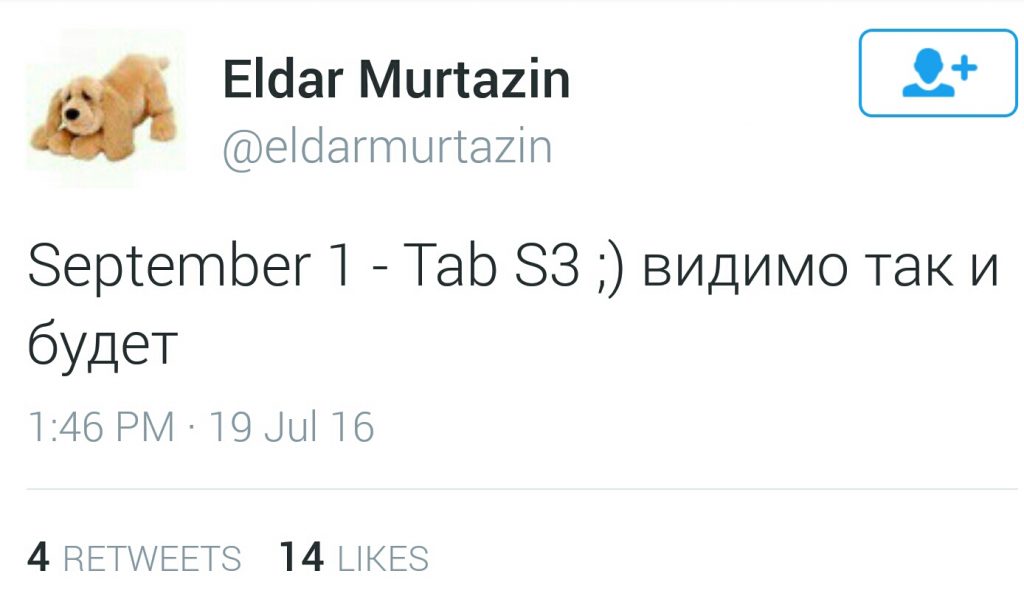 On his Twitter page, Murtazin wrote, “September 1 – Tab S3 :),” followed by some lines in Russian/Greek that are not translated. We assume this is the Galaxy Tab S3 because only Samsung makes a tablet with “Tab S3” as part of the device moniker. There are instances in which Samsung sells products that have monikers that are also part of other device names from other manufacturers (example: the Redmi Note 3 and the Galaxy Note 3), but the Galaxy Tab S3 moniker (or any part of it) has yet to be picked up and imitated by manufacturers who can’t seem to come up with creative monikers of their own.

We don’t know anything about the Galaxy Tab S3 except to say that it will likely be thinner and lighter than the current Galaxy Tab S2 and pack an updated processor, some improved cameras, all while maintaining a gorgeous, Super AMOLED display. Since Samsung’s been using UFS 2.0 in its smartphones and has now found a way to create expandable UFS memory, we presume this will be the route the Korean giant will take with the upcoming tablet. Additionally, since Samsung has already brought its upcoming Galaxy Note 7 iris scanner to one of its tablets, the Galaxy Tab Iris, but the Tab Iris is designed for government officials and business professionals and not the mass public.

For now, know that the Galaxy Tab S3 is on the way, but that the details about the new tablet, outside of those above, are scarce. Stay tuned: we have a feeling that as the unveil time draws closer, more details will come pouring in.