One of the problems many an Android consumer has had with Samsung and its TouchWiz UI is that Samsung’s “skinned” take on Android receives updates at least 4 months down the line, if not 6 months, past the time that Google and Motorola update their devices. In the Android world, few know that Samsung comes in second in Android updates, right behind Motorola, who provides very little outside of Google’s own software and updates its Moto X, G, and E devices relatively easy. You’ve likely not heard about the bizarre mess of LG, Sony, and HTC devices, but, even if you haven’t, Samsung is often attacked for its updates when the other Android OEMs (apart from Motorola, that is) are much, much later on sound updates. Yes, it seems as though Samsung is chided for too much and the others are chided for “too little.” 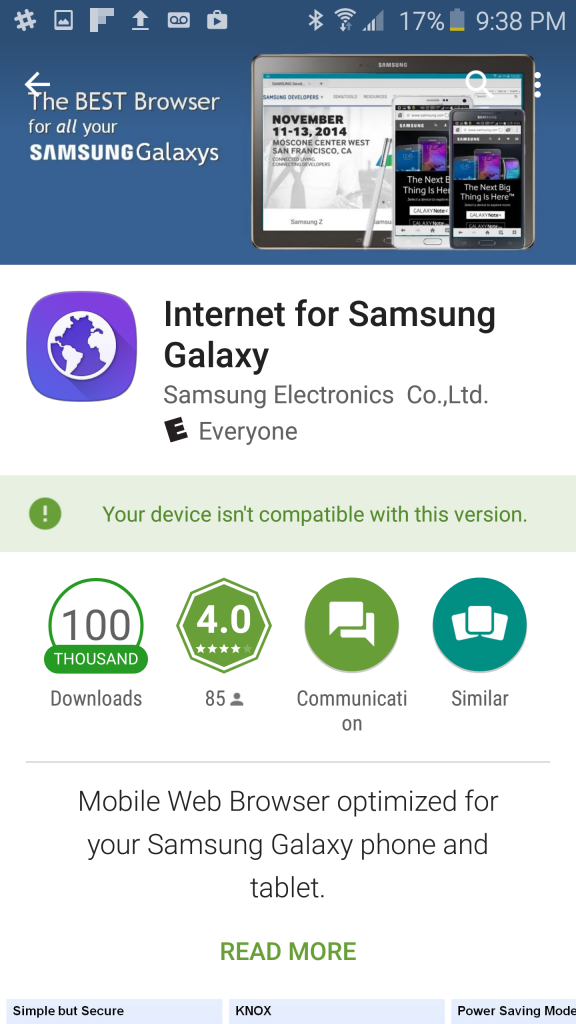 Well, Samsung just made a move that will help reduce some of the attacks if not all. The company published its Galaxy browser app at Google’s own Play Store on August 24th, without any fanfare whatsoever. The Galaxy browser app only works for Samsung’s new 2015 devices: the Galaxy S6, Galaxy S6 edge, Galaxy S6 edge+, and the Galaxy Note5. The benefit of publishing its Galaxy browser app at Google’s app store (called the Play Store) is that Samsung can now update it easily, without waiting for a new Android update to roll out changes to it. It could also be the case, though, that Samsung intends to make the Galaxy browser app available for even other Android devices, seeing that the Korean manufacturer just announced its new circular, Gear S2 smartwatch would have compatibility with devices that are on Android 4.4 KitKat or higher (such as Android 5.1.1 Lollipop, for example).

While we don’t know what Samsung’s up to next, we do know that this is right along with the tide of other moves Samsung has made to make its devices more “Google” and “vanilla Android-friendly” than they’ve ever been. And while that may still not silence the naysayers and win over Google fans, it is a good move for Samsung’s own Galaxy users.