The HTC One M9 is the Taiwanese manufacturer’s flagship this year, but all Android flagships are expected to stay on the most up-to-date OS update. Manufacturers who do not update devices quickly are not only scorned but shunned by Android users who prize fast updates to the latest and greatest. HTC finds itself in the same position, but the company will make unlocked One M9 users happy by updating their handsets to Android 6.0 Marshmallow this month.

As usual, customers with carrier-locked versions want to know the expected timeframe in which they must wait for the latest update. A Twitter user by the name of Maxime Landry inquired about his carrier-locked HTC One M9 in Canada to HTC’s Mo Versi a few days ago:

Maxime Landry: @moversi I know the Android 6.0.1 update for the unlocked M9 are targeted for this month, but what about carrier locked devices in Canada?

Mo Versi: @maxime_landry: Hi Maxime, it’s 6.0 version for M9. For M9 in Canada, that will be early next year. Thanks. 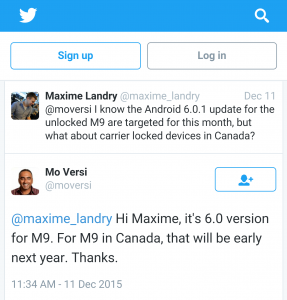 The reason behind why the unlocked HTC One M9 handsets will get Android 6.0 this month with carrier versions to follow has been a question that Android users have asked for the last 8 years (Android as an OS is now 8 years old). The answer has to do with carrier-locked models. Carrier-locked HTC One M9 handsets, for example, will get updates later because of carriers. Many customers enjoy paying $199 or $99 with a two-year contract for the latest smartphone, but there are compromises one must endure when doing so. One of those compromises involves what many call carrier “bloatware” where carriers place their own apps onto the smartphone and in the memory — causing you to lose storage space, among other things. Then, carriers decide to test their own locked handsets for customers before releasing it and, since customers do business with carriers, they render themselves helpless to the whim of carriers.

Whenever a new Android update is meant to be released, it goes through development and testing with Google before it is released to manufacturers such as HTC. HTC then takes the unlocked One M9 handsets and sends the update to carriers to take care of carrier-locked models. So, HTC will directly update the unlocked One M9 handsets because those customers purchased the handset directly from the carrier; carrier-locked customers who are locked into installment plans and contracts, however, will have to wait until the carriers push out the updates. So, carrier-locked HTC One M9 customers will be waiting for a while. If the Nexus 6 Android Marshmallow rollout tells anything, unlocked Nexus 6 users got the update on October 5th, while carrier-locked Nexus 6 customers may still be waiting for Marshmallow (they waited for at least six weeks, with T-Mobile’s Nexus 6, for example).

It’s not a pretty picture, but it goes to show that you get what you pay for. Maxime and Canadian residents won’t receive the update until the end of January/early February at the earliest, so it’ll be a hard 8-week wait.