For most of Telltale’s recent games, Episode 5 would be the review of the final episode of the story. However, Game of Thrones is giving us a six-episode story so at this point we’re only setting up the finale. While the GoT series has always been strong it’s storytelling, A Nest of Vipers is a short episode so it doesn’t give us much to sink our teeth into, but it does culminate in a moment that promises to make Episode 6 a very different story depending on what decision you make. While spoilers will be avoided whenever possible, be aware they that may occur.
Last Time on Game of Thrones…
Once again we pick up the story of the Forester family, which is our stand-in for the Stark’s. A family from the north of Westeros with more nobility than brains. Asher, the black sheep is attempting to raise an army and has gone to Daenerys Targaryen for help. His brother Roderick, who has been leading the family at home is once again punished simply for existing. Sister in King’s Landing continues to hone her skills at political intrigue, so well that Cersei Lannister notices. And former squire Gared Tuttle continues to search for the North Grove after venturing past The Wall.
It’s this last segment which has become the most curious. While one can see how the rest of the plot lines will come together into some semblance of a finale,  this last part seems so separate from the rest, both geographically and thematically, that it’s hard to say where it’s going. Best guess at this point is that there will be some loose threads left over when Season 1 ends, and that will be more important in Season 2, which is likely to happen, though not yet announced.
You’ll get to spend a decent amount a time with a few of your favorites from the HBO series, including the welcome return of Peter Dinklage and Tyrion Lannister. Also a special shout out to professional wrestling’s Samoa Joe who voices the pit fighter Beast. 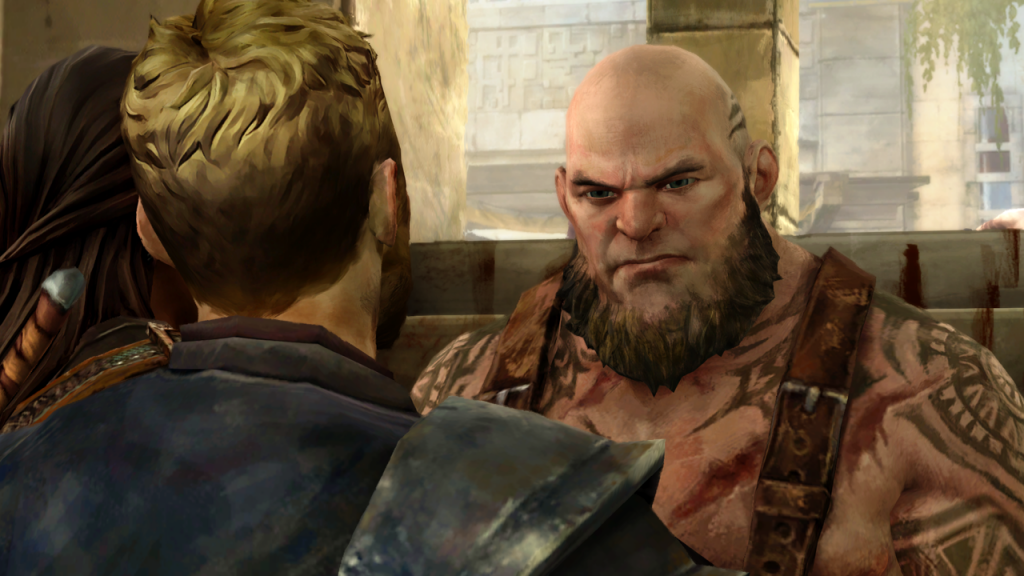 Technical Marvel (At Least For Telltale)
From a technical standpoint, this is one of the best Telltale episodes I have played in a long time. While I’m used to dealing with audio bugs and video glitches in Telltale games, this episode ran so smoothly that I didn’t even realize how smooth it had been until I finished the game and noticed I hadn’t made any notes regarding technical problems. While your mileage may vary, this play through (on Xbox One) was without incident. Let’s hope this will be an ongoing trend.
Iron From Ice
Without going into spoiler territory, the closing moments of A Nest of Vipers gives you a decision that will likely have a major impact on the final episode. In true Thrones fashion sacrifices need to be made and the player is not immune from this. Telltale did a similar thing with their other currently running series, Tales From the Borderlands. This led the most recent episode of that series to be drastically different, depending on how you handled a single choice earlier in the series. This has the potential to give Telltale’s games significantly more replayability than they have had in the past.  This is welcome, as Vipers only took about 90 minutes to complete and if there were a reason to play it again, that would make this fact a little less annoying. Honestly, the episode is so short it’s a wonder why the content was reapportioned as Game of Thrones could have easily been a five episode story without making any of the episodes thus far significantly longer. Perhaps all will be explained when Episode 6 comes out in a few months.
Bottom Line
If you’ve followed the story this far, you’re probably willing to come a little further, and episode length not withstanding, you won’t be disappointed that you did. If you haven’t taken the plunge into this series yet, there’s nothing here that’s a “must play” so you might as well wait until the series is complete and then play the whole thing.
Facebook Twitter Google+ LinkedIn StumbleUpon Tumblr Pinterest Reddit VKontakte Share via Email Print