The Huawei Nexus 6P has been confirmed as the second Nexus smartphone on the way (apart from the LG Nexus 5X), with the retail box packaging having been leaked this week. Now, we have word on the colors of the Nexus 6P (for those of you who like to customize your device down to the color).

The Huawei Nexus 6P will come in four colors: gold, aluminum, black, and white. Of course, we’re not surprised to see a gold color leak for the Nexus 6P: we’ve seen a gold color in place for the iPhone 6, and Samsung’s Galaxy S6, S6 edge, S6 edge+, and Galaxy Note5 all have gold color options (or what Samsung calls “Gold Platinum,” with the “platinum” color shimmering in the light). HTC intends to leak a rose gold color option for its A9 (which hasn’t arrived yet but is rumored to be on its way), so it makes sense for Google to decide to implement a gold color option for Nexus fans. The image is provided below, courtesy of Android Police. 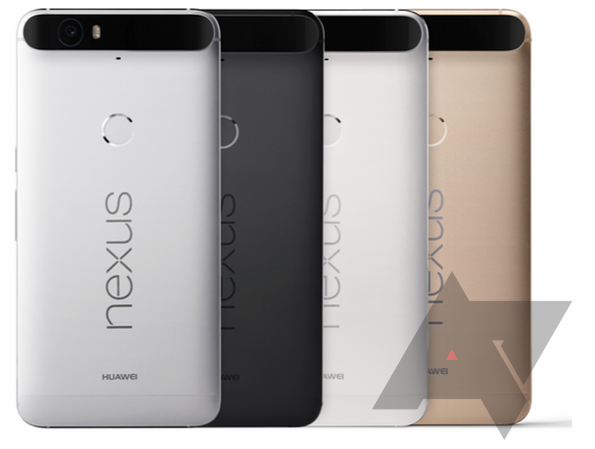 There will be an aluminum color option, which almost looks similar to the white color when looking at it from leaked photos. And, as we’ve noted, the black bar at the top where the camera and the LED flash are placed is nothing short of bad design on the part of Huawei and Google. In this regard, the black model looks best, although the gold color option looks nice – and would look even better if the bar across the top were painted gold instead of black. Even the black bar at the top of the white Nexus 6P’s back cover just looks out of the fashion line.

The colors, photos, and names are in, but we’re still waiting on the price of the Huawei Nexus 6P. We don’t yet know the pricing, but we’ll be here to provide it when it “slips” – oops, we mean, “leaks.”