Google is, as usual, giving deals and offers for Android consumers who want to spend a little money this holiday season. For those who have been wanting to pick up a new Taylor Swift album can now get it for 50% off. In fact, all albums at Google Play are now 50% off, through January 4th. Users can pick any album (and the key word is “any”) and get the price slashed in half. That means that, for a $15 album, you’ll only pay $7.50; Google is picking up the tab for the rest of the album price.

This is a good time to get a new album, one that you’re interested in and are willing to try for the first time, or buy a present for a loved one while living on a budgeted income. Last Christmas, Google gave away the Frozen soundtrack album for free at Google Play, and Google has been giving away music from well-known artists such as Beyonce and Destiny’s Child, Michael Bolton, Michael Jackson, Luther Vandross, and even country music artists such as George Straight and Christian music artists such as Mercy Me. So, there’s a little something at the Google Play Store for everyone, and the new half-off deal is even more tempting than some of the free giveaways from earlier this year. 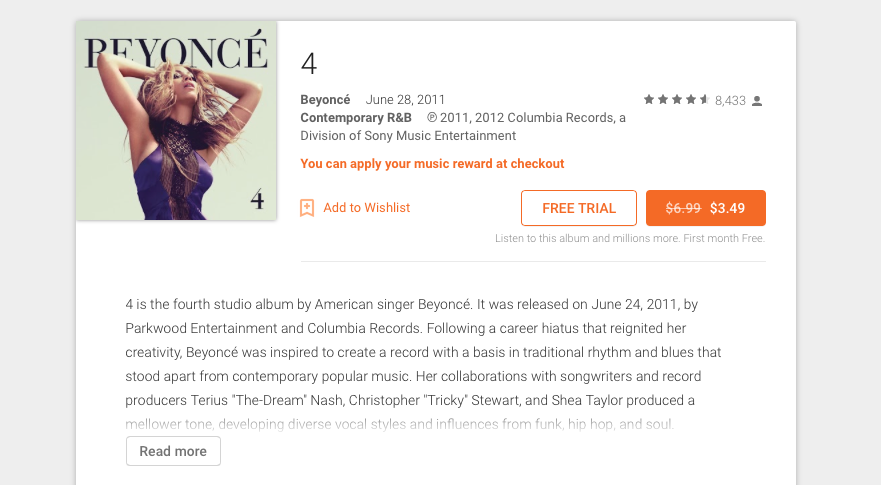 If you want to take advantage of the new Any Album, 50% Off deal, you can do so through the New Year. Keep in mind, however, that you must purchase the album by January 4th. We suggest that you add the album to your cart and pay for it right away, though some users may want to pull their gift cards from under the Christmas tree and open their gift cards for Google Play first, before taking advantage of Google’s offer.